Racing has always been an integral part of ice yachting. Early sailors challenged one another for supremacy on the ice. In its day, ice boating was the fastest means of travel.  Challenges for bragging rights for the fastest boat have existed since these crafts were first built & sailed. Races for cash, furs, silver plates, watches, pennants and a silver tiller were noted in early news accounts. The Poughkeepsie yachts were known as the most finely crafted and the swiftest. That didn't stop challengers from other locations- notably Athens, New Hamburgh, and the New Jersey sailors from the North Shrewsbury River - from claiming that they had the fastest yacht yet seen.

Irving Grinnell, grand-nephew of Washington Irving, was a wealthy "country-gentleman" who settled in Wappingers Falls, NY, on a large estate. He was active in the New York Yacht club, serving as commodore at one point, and his passion for sailing extended to winter ice yachting. He was a keen ice yacht sailor and founded the New Hamburgh Ice Yacht Club in 1869, building up a large fleet of yachts. This passion for racing led to his creating the Ice Yacht Challenge Pennant of America. It was to be the winter version of the America's Cup, signifying the fastest boat, on ice.


After several winters of poor ice for sailing, the pennant was finally raced for in 1881.

The 'last' two races for the IYCPA of this early era took place in 1902. Participants wisely modified the rules to race to include just 2 yachts each from the challenger and defending clubs.
Jack Frost & Icicle represented HRIYC while Scud & Dreadnaught were chosen from the North Shrewsbury Ice Boat & Yacht Club - the challengers for the Pennant. Frost won both races.

To read about the last race for the Pennant (in the era of the gaff rigged stern steerers) go here.


(All these older, historical photos are  Courtesy of the Franklin D. Roosevelt Presidential Library and Museum, Hyde Park, New York.)

Posted by Brian Reid at 5:12 PM No comments: 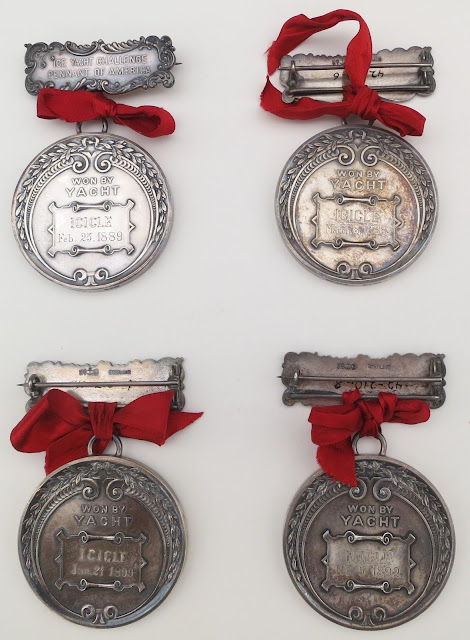 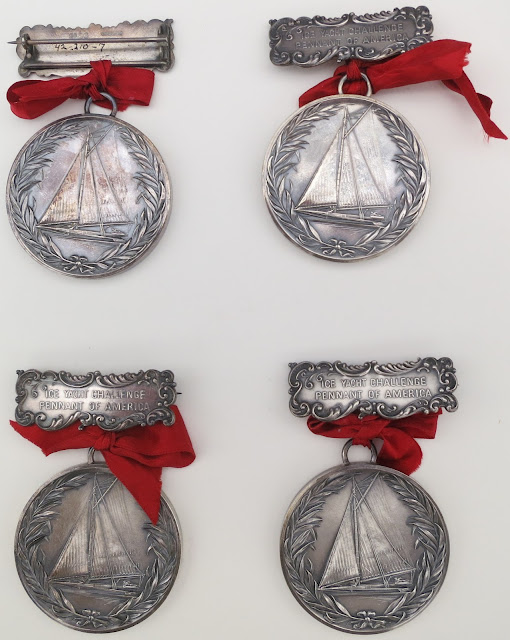 Posted by Brian Reid at 9:07 PM No comments:

The last race for the Ice Yacht Challenge Pennant was in 1922. Some years early Archie Rogers returned the pennant back to the New Hamburgh Ice Yacht Club. Between years with no good ice, old timers dying off, and failed efforts to get off a race, the pennant went back to where it originated. Finally a race was organized between clubs from Chelsea and New Hamburgh. One report is reprinted below:
(Read Frank Drake's letter about his memories of that race, in  a letter he wrote to Ray Ruge in 1950)
Scout is winner in iceboat race   (NYT 2/9/1922, and Poughkeepsie Eagle)

  Sailing 10 miles to windward and ten to leeward over a twenty-mile course near here (Poughkeepsie)
on the Hudson River today, in the first of three races for the Ice Yacht Challenge Pennnat of America, the Scout, defender of the pennant now held by the New Hamburgh Ice Yacht Club, crossed the line the winner. The time was 1:03:10.

The Vixen, the lateen-rigged challenger, owned by Joseph Jova of the Chelsea Yacht Club, floundered in the wind, which was dead to windward, and finished fifth.

The masterly sailing of Scout by F.V. Drake in the windward breeze brought the defender across the finish line within three minutes of the record for this course for boats of sail expanse of 350 square feet.

Sailing conditions were ideal for today's race, the ice being hard and the wind directly north, with only an occasional squall. 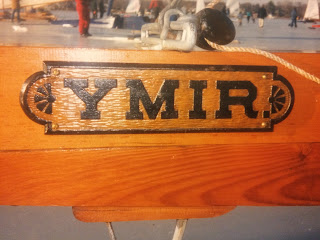 Interestingly, according to an article in the Poughkeepsie Eagle, 3 of these same yachts raced each other  ten years earlier  - Feb 28, 1912. In this 10 mile race, off New Hamburgh, the finish order was:
Vixen, sailed by Capt. William Albertson  of the steamer Mary Powell;
Scout, sailed by Capt. Frank Drake, owner Jake Millard handling the sheets.
Wizard, sailed by Capt. Preston LeRoy, owner Wm. Workman on the sheets;

Posted by Brian Reid at 7:11 PM No comments: 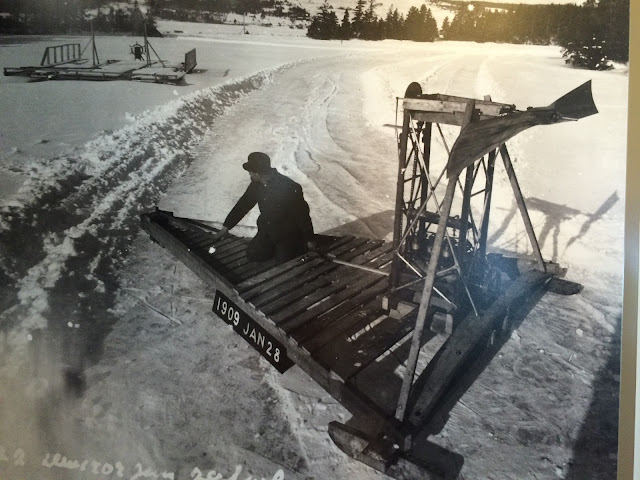 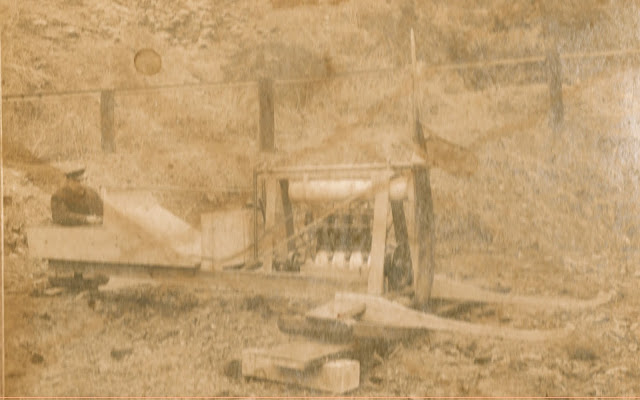 Sailing the Hudson River, off Astor Point, through the Years

One of our favorite sailing sites on the Hudson River is the stretch of river north of the Kingston-Rhinecliff Bridge, off of a point of land on the east shore called Astor Point. Named after the Astor family whose home, called Rokeby, built in 1815, is still inhabited by descendants.  The river is quite wide here and the shipping channel is maintained by the Coast Guard to the far west side of the river.  This leaves a large expanse of ice east of the channel, when it sets in, available for sailing.  Access is often through the historic and eclectic estate known as Rokeby.  Current day descendants of the Astor family maintain the historic mansion which houses an amazing collection of antique ice yachts.
The master of ceremonies during ice yachting season is Richard Aldrich.  Ricky has been ice boating on the river off the family home since 1947. His father, Richard Aldrich started iceboating in the early 1920s. He built a small iceboat that he sailed on a pond on the property. Soon after that he acquired several boats from neighbors in the Hudson Valley.  The barns on the property still house an aging fleet of boats, including  Reindeer & Pathfinder, boats originally from the Huntington Estate in Staatsburg.  Rip van Winkle & Spider came from the estate of Victor Livingston, Ricky's cousin from across the river in Kingston; Hawk & Rudolphe came from Kunze Todd's widow in Hyde Park.  Todd collected iceboats from  various Hyde Park owners as they aged in the early 1900s. Ricky gathered some parts from the Jack Frost through the Todd family. Lastly, Comet is a boat his dad got back in the 20s from another estate south of the Rhinecliff Bridge.
This whole post started as I recently acquired (many thanks to Doc Shuter) a series of photos of iceboats that were taken off Astor Point in 1939. I showed them to Ricky recently. He immediately recognized them, though we couldn't find the album of photos that he has of iceboating from that era.

Ricky noted that his dad frequently set up the fleet when the ice was in during the 40s & 50s. There was an active farm on the property and many of the workers on the farm helped to get the fleet up and sailing. Ricky returned "home" in the late 60s after years at school and traveling in Europe. The first time that the fleet was assembled in a decade or so ( his dad passed on in the early 60s) was in 1968. Photos of the fleet in action from 68 and 1970 follow.

An afternoon at the Roosevelt Library in Hyde Park


I had an opportunity to check out some of the iceboating artifacts at the FDR library this week. FDR was keen on including items in the Presidential Museum from all his interests in life. Ice yachting was one of those interests. The majority of the items came from his uncle, John A. Roosevelt.  John A. Roosevelt (JAR)  was a charter member of the Poughkeepsie Ice Yacht Club, which was established in 1861. He was an avid sportsman, a competitive sailor and a collector of ice boat items. He left several scrapbooks of news articles on ice yachting, from 1862 through 1902. His Ice Yacht Challenge Pennant medals for the 4 victories his yacht Icicle claimed are also housed at the Museum. Icicle was originally displayed at the museum until renovations in the 1990s led to its removal. It is now on display (partially) at the Hudson River Maritime Museum in Kingston. Here are a few of the items I documented on the visit.  (The next several blog posts will feature other items)

Posted by Brian Reid at 9:05 PM No comments:

FDR was an avid collector of ship models. One can spends hours checking out the tremendous collections of models (not all are on display of course)  at the Roosevelt Library. There are two ice yacht models - neither of which are on display. The Mo-Wa-The was built by J. Sterling Bird. See pictures of that model here.
The Whiff model was built by Jacob Buckhout around 1875. It is a fabulous example of the early side-railer design that Buckhout was building in the 1860s & 1870s.  Some of the history of Whiff can be found here.
The model was set up in a work room in the basement of the museum, thus the backdrop wasn't ideal. But you can see the detail fairly well. 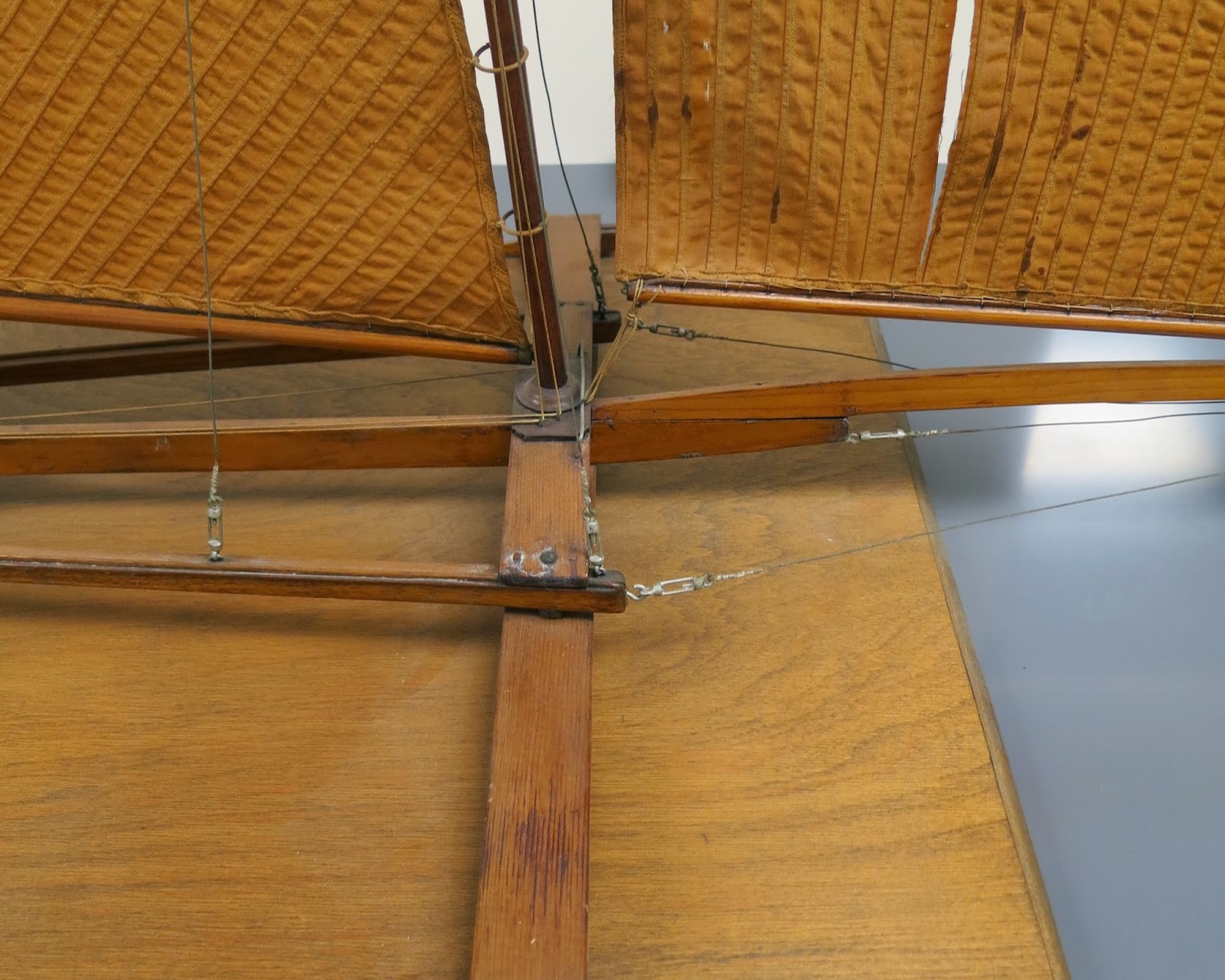 Posted by Brian Reid at 9:00 PM No comments: