A Great Day at the Bay! 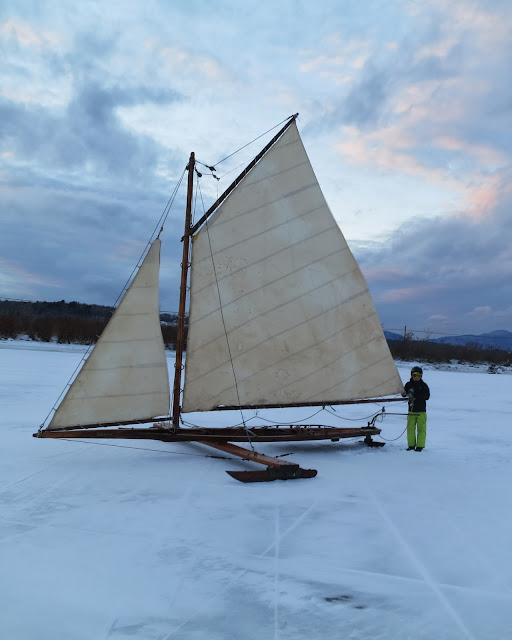 The snow from yesterday covered the bay as I arrived around 10:30 this morning - about 3 inches of powder. Fortunately the temperature hovered around 19 degrees all day, and, unlike yesterday, the wind was blowing. Once out of the south end there was plenty of wind to keep moving and relatively clear ice. A good sized crowd came down over the course of the afternoon. Gave over 15 rides to folks - almost all taking their first sail in an iceboat. There may be sporadic sailing over this week, dependent if any of the boat skippers have time. Both Boreus and Flicker are on the ice, each needing a bit more work to be ready to sail. That will give us 6 boats for next weekend. Looking ahead there is still a chance that boats will be setting up on the Hudson by Friday. Should know more by late week.

Aurora    Aurora was likely built around 1910.  It carries about 250 sq ft of sail.  Aurora  is a good example of  a later design period (post 1883) in which the mast is stepped forward of the runner plank and wire rigging is used.  This created a lighter, more balanced boat that didn’t spin out as easily as the earlier designs.  It is now owned by Frank Wall of Ghent, NY.

North Wind  North Wind (circa 1896) is 29’ long and has about 240 sq ft of sail.  Built near Orange Lake NY, it sailed there for many years.  It has a hollow backbone and hollow spars.  It is owned by Reid Beilenberg of Germantown.

Historical note: North Wind and Aurora have sailed together for over 40 years. In 1973 they raced each other during the Eastern Ice Yacht Association’s Championship on Greenwood Lake, January 18, 1973.
According to an article in the Evening News (from Newburgh?):
“Aurora,” owned by Chuck Merkel of Montrose and a member of the Hudson River (Ice Yacht) Club took second in Class X. Reid Bielenberg of Garrison sailing “North Wind,” formerly owned by the late Ed Hughes of Newburgh, was third.  (Class X boats have a  sail area up to 250 sq ft.)

Cyclone   Cyclone was built in 1903 in Hyde Park by Charles Van Loan.  It was originally owned by Herman Livingston Rogers, son of Archie Rogers.  The Rogers family had one of the largest collections of ice boats in the mid-Hudson area at the turn of the century.  Included among their boats was Archie Rogers’ Jack Frost, 4 time winner of the Ice Yacht Challenge Pennant of America.  Cyclone likely sailed the Hudson River off of the Rogers estate in Hyde Park.  The runner plank and sails are not original.  It is owned & sailed by Lisa & Brian Reid of Red Hook.

Puff
Puff (circa 1874) is 27' in length and carries 236 sq ft of sail. It was originally part of Irving Grinnell’s fleet of ice boats and sailed with the New Hamburgh Ice Yacht Club. It is very similar in design as Whiff (see earlier post on Whiff), though a bit smaller. Grinnell, a good friend of FDR and an avid champion of ice boating, was a founding member of the New Hamburgh Ice Yacht Club, established in 1869. In 1881, Grinnell put up a 30 foot silk pennant to signify supremacy in ice yacht racing. The "Ice Yacht Challenge Pennant of America", was never won by Grinnell, but was claimed four times each by John Roosevelt's Icicle, and Archie Rogers' Jack Frost.  Grinnell was also commodore of the New York Yacht Club
Puff was in disrepair when HRIYC members Roger Hausch, Peter Mund and Krum rebuilt her at  in the early 1960s, at which time its rig was redesigned. Puff won many races on  in the 1960's, its home ice for many years after it was removed from the Grinnell estate. Subsequently,  the Puff was owned by John Allen,  R.Cobe from Verplank, B. Benson of Sleightburgh / Pt. Ewen and then acquired by the late Michael Corey of  in 1998.  Puff is now owned by Corey’s family

Boreus  Boreus was built in New Hampshire in 1927 and sailed lakes in that region until it came to the Hudson Valley a few years ago. Boreus is 24’ long with 198 sq ft of sail. It is marconi rigged.  It is owned by Steve Schwartz of Poughkeepsie.

Flicker     Flicker is a unique design called a Westchester One Design. It was designed by Dick Moeller, who helped establish the Eastern Ice Yacht Association in the late 30s. It is a cat rigged boat and there were at least 8 of them built. They were owned and sailed by members of the Westchester Ice Sailing Club, which was quite active  from 1947 into the late 80s. Art O’Connor of WISC obtained Flicker (then called HIC) from John Childs. John Hardeman and I obtained it from Art about 15 years ago. It is one of only 2 known surviving examples of this style boat. Stefan Hydacker has been maintaining and sailing it recently.