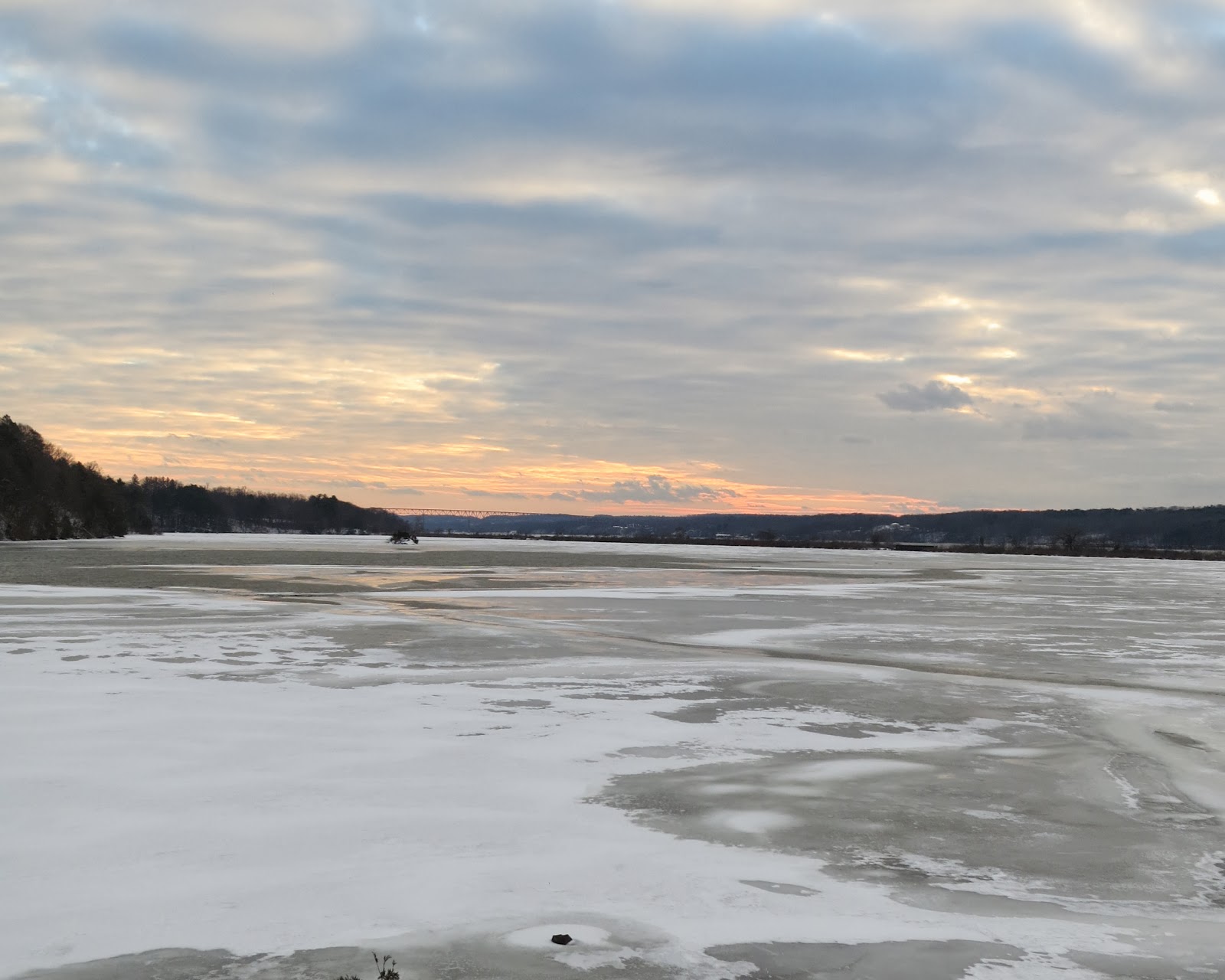 Took in some nice views of the Hudson River (open with smaller ice floes riding the currents) and Tivoli Bay on Sunday from Poet's Walk in Barrytown and from Bard College. There is a great view of the Bay from Blithewood Manor (at Bard)  and a trail that leads you down to roughly the mid-point of the Bay. Right now there is open water. The Sawkill Creek has cut well into the Bay with a wide swath of open water after the rain and warm temps this past week. There was a lot of water visible along the broken up edges and I didn't think of trying to get onto the ice from where the steep trail I was on led to the edge of the bay. But with the coming cold - it looks like we will have four nights of single digit temperatures - the Bay should be in fine shape - ice thickness-wise - for the weekend of the 25th. We will be watching the River as well. There is still hope for this season!

January 11, 2014
I'd hoped today would be the day that I would be setting up my boat on Tivoli Bay. After 3 full days of very cold weather earlier this week, I knew the Bay would be  solid from end to end. Instead we looked at 60 degrees, pouring rain and thunder and lightning. It was a miserable day. North Wind (see previous post) did sail yesterday (Friday), covering the full length of Tivoli Bay. She is currently covered up and waiting out the upcoming 4 days of above freezing temperatures. Next weekend will get back to ice making temperatures. We'll see how the ice holds up.

January 5:   It was a beautiful day to snowshoe across Tivoli Bay today. There was a consistent 4-5 inches of ice, covered with 3-5 inches of compacted drifted snow. Coyote and deer tracks criss-crossed the snow covered expanse. We saw bald eagles - an adult and juvenile - fly off from their perch along the east shore of the Bay near Montgomery Place. It will remain to be seen if the rain on Monday is enough to saturate and melt the snow in advance of the deep freeze that will follow. Locations along the river will be scouted to see if any sailable ice sets up by the weekend. Photos are from Clermont State Park on Jan. 4 and Tivoli South Bay on Jan. 5. January 2, 2014 A new year and we are looking at bitter cold temperatures ahead. The snow storms of mid December have come (an 11 inch dump and a 5-6 inch storm) and gone (a 3 day warm spell, along with rain, melted everything by Christmas). I skated for the first time on New Years Day on a neighbor's pond, just ahead of an impending storm that could bring up to 8 inches or more of snow, along with our first temperatures below zero. I joked with a few people recently that there is no need to look at snow forecasts any longer. Just know that we are due for a good snow storm as soon as we have ice thick enough to consider sailing on! But the extended cold over the next seven days or so could look good for the Hudson River to freeze over. Perhaps a consolation for the fact that the Bay and other possible sailing locations will be covered in a good amount of snow.
Posted by Brian Reid at 6:19 PM