I was looking through my piles of articles on ice boating and immediately came across one of the earliest articles I've seen on ice boating on the Hudson.  Following is an excerpt from the Poughkeepsie Daily Eagle, December 29, 1860.

"The Sport on the River - We took a stroll yesterday to the river partly to enjoy the fine bracing atmosphere and to make a note of anything interesting. On arriving at the dock, foot of Main Street, hundreds of human beings met our gaze darting hither and thither upon those promoters of health - skates." (the article goes on for another paragraph about the ice skaters, then continues...)
"But perhaps the most important feature of winter's enjoyment is the great "penchant" for ice boats. We have collected as near as possible an account of these crafts, and give the result of our labors below:

"We challenge any city in this country to produce a fleet of ice boats that will compare in size, beauty and speed with the Poughkeepsie fleet.
Ice boats are an institution, If that fact was never known before it is now. In them (if Old Borealis ever smiles on their sails) is concentrated the speed of the locomotive, and many an anxious eye is cast upon the occupants as they pass with a Whr-r-r that makes the blood travel through your veins with a quickness before unknown. It is well worth a visit to the river while the ice is good to see with what zeal the different ones enter into this kind of enjoyment. The ice is stout above the ferry track, and the skating is 'bully.'  "


It is clear that by 1860 there were already  over a dozen ice boats sailing the Hudson off of Poughkeepsie. Several significant names in the sport of ice sailing  - Roosevelt, Buckhout, Booth and Innis were among the earliest reported boat owners. These sailors would be still in competition over the next 25-30 years. The Artic was later reported to be still sailing into the 1900s - as it was originally built.
One of the earliest photos I've found of an ice yacht on the Hudson is of the Vesper:

above:  John A. Roosevelt's Icicle, circa 1875, and,
below, as it likely looked at the time of the Poughkeepsie Eagle article. This sketch was from an 1861 Scientific American issue. 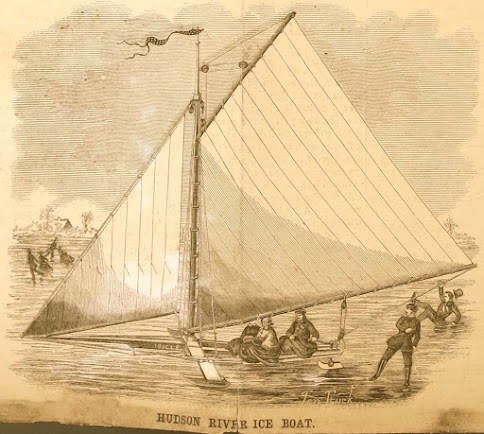