Robert Lawrence, elder statesman of ice yachting, passed away on the 19th of March 2015. A founding father of the Hudson River Ice Yacht Club has passed on and will be missed.

I’ve talked iceboating with Bob many times and took part in 2 different interview sessions with him many years back. He was amazing in his knowledge of ice yachting. He had stories upon stories and those stories were cherished by all who heard them. The unique and amazing feeling I always took away with me  was that I was talking with someone who had “1 degree of separation” with the era of ice yachting that featured John A. Roosevelt (as well as FDR) , Archie Rogers, Irving Grinnell and George Buckhout.

One of Bob’s ice boating mentors was Frank V. Drake, a steamboat captain from New Hamburgh, NY. Drake was the last skipper to win the Ice Yacht Challenge Pennant of America in 1922 (the original pennant, as put up by Irving Grinnell in 1879). Drake won it sailing the 1906 stern steerer Scout, which Bob later acquired. (Scout is still in the Lawrence family, sailed by his son Rick & grandson Kevin). Captain Drake, according to Bob, also sailed professionally for John A. Roosevelt. 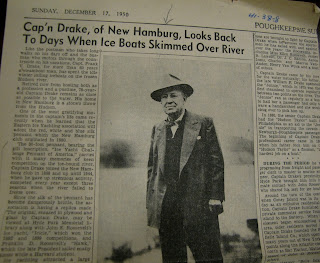 Drake kept up a regular correspondence with Ray Ruge, the man who spearheaded the revitalization of the Hudson River ice Yacht Club in the 60s. Ruge was known as “Mr. Iceboat” and wrote regularly about ice boating for Rudder magazine, encyclopedia entries and more.  In one letter to Ruge, Drake talks about “Bobby Lawrence” (then about 15 years old). Bob & his dad were building a 250 sq ft boat - Junior - and Drake was “quite anxious to see how she does against Gale and Frappe.” similar sized boats that were the speediest crafts at the time on Orange Lake. Drake noted how Bob had purchased a sail from George Buckhout - a 350 sq ft sail that, with Drakes help, cut down to fit his new 250 sq ft boat. Bob recalled meeting George Buckhout (Buckhout built FDR’s Hawk, John A. Roosevelt’s Kriss and many other first class ice yachts) on Orange Lake in the 40s, as well as going to Buckhout’s shop in Poughkeepsie to buy the sail for his boat.
In one other direct link to the “glory days” of ice yachting in the 1880s-1900, Bob talked of meeting Charlie Merritt on Orange Lake. Charlie was in his 80s in the 1940s, but still active. Charlie  & his brother Bill were crack ice yacht skippers, each of whom had raced in major ice yacht competitions. They built the lateen-rigged yacht Vixen, sailed for many years by John A. Roosevelt and still sailed today on the Hudson. Another Merritt lateen yacht - Ranger - raced in the Challenge Pennant Race (Charlie Merritt was at the helm) in 1899. Icicle took the pennant that day.

Robert Lawrence first sailed on Orange Lake in 1938 and Bob recalled pushing a boat across the lake and then sailing back to shore - the crude sail took them in one direction only. His uncle Alfred Innis was an avid sailor and was related to Aaron Innis of Poughkeepsie. Aaron Innis was founding member of the Poughkeepsie Ice Yacht Club ( formed in 1861), and his ice yacht  Haze, won the ice yacht Challenge Pennant of America in 1884 and 1885.

Bob sailed for close to 70 years. Most of his sailing days were over by the time I got to know him. Yet he was always around - whenever boats were being set up on the Lake, at our annual meetings and most club dinners. I recall him getting a ride on the 6-wheeler out to the starting line for the race for the Van Nostrand Cup in 2003 in Red Bank. After the race he was sailing back to the clubhouse on Scout - the boat he purchased from the Drake family - after it had
raced, though lost, that day.

He made one last appearance on the Hudson River last March at the grand gathering of historic stern steerers, including Jack Frost.


Bob was often around on Orange Lake when the ice was set, and in later years would watch the goings-on from the “clubhouse” overlooking the Lake, offering advice on rigging your boat or opinions on a particular boat (or sailor!)  It was Bob, along with Ray Ruge, that spearheaded the drive to rebuild Archie Rogers’ champion ice yacht Jack Frost.   Frost was 5-time winner of the Ice Yacht Challenge Pennant of America. In the basement of his house, a group of enthusiasts, led by Ruge, built a new spruce backbone and runner plank. The 50-foot Jack Frost, with parts original to the 1892 yacht, raced again this February, under the steady hand of his son Rick and grandson Kevin, as it won the inaugural race of the Class 1 Challenge Cup. It seems Bob held on, as illness overtook him, to hear of one last victory of his beloved Frost.